Admin
Latest News
1 Comment
Gujarat To Reopen For Students Of Classes 6 To 8 From 18 th February: The government has refused to give mass promotions in primary schools. Reports for mass promotions came in the media that primary schools in the state have not yet started physically amidst the Corona riots. However, the state government clarified that it had no plans to give mass promotions to students due to the epidemic. State Education Minister Chudasama said, “Examinations will be held before promoting students in the next academic class.” 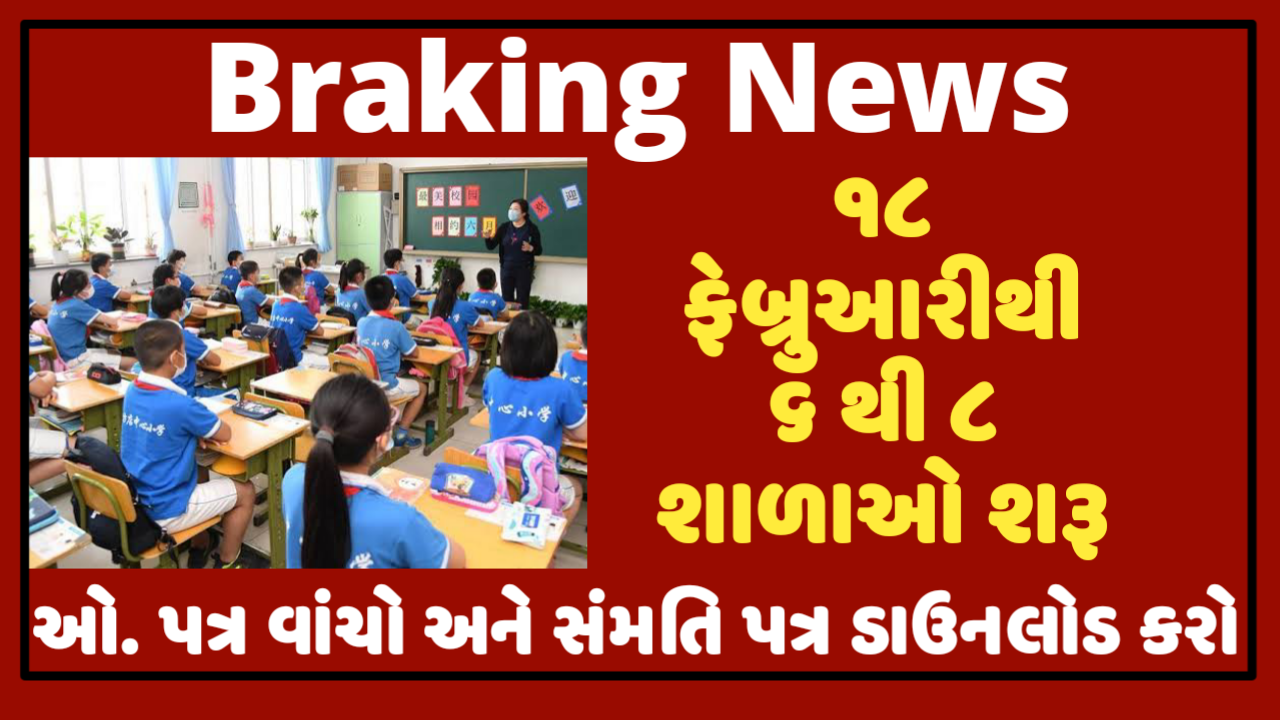 He further said, ‘Std. Students of 1st to 8th and 9th as well as 11th standard will be examined and their examinations will be based on the online syllabus taught by the schools. “If the entire syllabus could not be taught online due to the Koro epidemic, the syllabus will be taken on the basis of the number of syllabi taught to the students,” Chudasama told our correspondent Times of India.
One after another schools and colleges are being started in Gujarat as soon as the Koro epidemic in the state subsides. Earlier, first year colleges as well as standard 9 to 12 schools have been started in the state. And now a big news is coming that now Std 6-8 Schools will also start from 18th February.
After the commencement of Std. 9 to 12, first and third year at college level as well as tuition classes, now the government has completed preparations on all fronts to start physical education in Std. 6 to 8 classes in the field of higher primary education. The decision to start standard 6 to 8 classrooms from Thursday, February 18 has been taken by the Rupani government today.
The decision of the State Government in the wider interest of the students pursuing primary education
February 18 in state schools in Gujarat 6th to 8th standard classes will be resumed
Government of India Guidelines for Corona Transition Control
Guidelines of the state education department dated January 8, 2021 Schools will have to follow Bay strictly
Decision of State Government to resume Std. 6th to 8th classes in the long term interest of the students as the prevalence of Corona transition in the state is declining.
Online education system by schools will remain the same Educational work of Std. 10-12 and last year of undergraduate and postgraduate was started from 11th January as an approach by the state government to gradually resume the teaching work of classrooms.
Std. 9 and 11 classes have been started from 1st February
The first year classes of the college started from 8th February
Classes of Std-6 to 8 will start from 15th February
Attendance of students in Std. 8th to 12th classes gradually increased – 80% students joined classroom education
Re-education work will be started in the classrooms of Std. 6 to 8 in the state from next 15th February 2021.
According to the resolution issued by the education department in this regard, classroom education will have to be resumed for all the board primary schools in the state for Std. 6 to 8.
Giving more details regarding this resolution, Education Secretary Shri Vinod Rao said that with the commencement of physical education work in all the board’s primary schools in the state i.e. Std. 6th to 8th class, The guidelines issued in January 2021 have to be strictly followed
For this purpose, instructions have been given to all the District Education Officers as well as Primary Education Officers to ensure that the schools comply with the SOP, the Education Secretary said.
He added that the state government has decided to re-open class 6 to 8 classrooms in primary schools keeping in view the long-term educational interest of the students as the transition to corona has now come down due to intensive work of the state health department.
Education Secretary Shri A clearly stated that attendance in this offline direct education work will be voluntary and the educational institution will have to get the prescribed consent form from the parents of the students.
Mr. Vinod Rao also added that the existing system of online classes for the students who do not engage in classroom education should be continued by the concerned institute-schools
Instructions have also been given in the resolution of the education department not to come to the school to the students-teachers or other staff who are infected with corona as well as not to start the schools in the containment zone, said the education secretary.
Special emphasis has been laid on maintaining social distance between the students in the classrooms of Std. 6 to 8, compulsory use of masks by every student, teacher as well as other matters of SOP.
It is pertinent to point out here that even during the Corona transition, the state government continued the educational work by setting up an online education system in the wider interest of the students and took care not to spoil the studies of the students.
Gradually classroom teaching work has been started as Corona’s condition has improved. Accordingly, class 10-12 and final year class of undergraduate and postgraduate level have been started in the state from 11th January.
Classes of Std. 9 and 11 have been re-opened in the state from 1st February and first year classes of the college have also been started from 18th February.
Download Official Letter and Sammti Patra
The number of students who were initially involved in this classroom education in Std. 9th to 12th classes has increased from 30% to 20%.
Parents are also enthusiastically contributing to the education interests of their children in these fruitful efforts of the state government and are increasingly motivating their children for classroom education.
Join WhatsApp Group
Join Telegram Channel
← Previous Post
Next Post →